Me and Boarding School

Part 1, a tale of NOT writing about my boarding school experiences, can be found here.

This post is published here with the caveat that this is my memory, that is neither linear nor particularly reliable, and that others who attended the same school, both within and without of my family may share similar memories and yet remember different details. 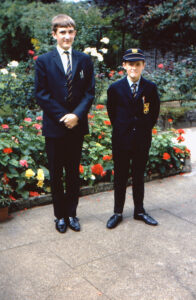 My oldest brother went away when he was 11 and I was 6.  I don’t remember him going away, or returning, I just knew.  My memory is full of blanks.

My youngest brother went when he was also 11-to the same school- I was 8. I am better able to remember him going away and returning.

I can remember sitting the common entrance exam and being told I’d passed with flying colours, sat in an office in the building where my father was based as a squadron leader in the RAF, watched over by someone, but I don’t recall who.

I remember the steps to the entrance hall of the boarding house though don’t remember climbing them.  I have memories of descending them though in my nightgown, in the middle of the night, for fire escape practices.

I suppose that men, caretakers maybe, collected the trunks from our cars and stacked them in the hall, our tuck boxes in the cupboard outside the junior common room. But I don’t remember it being done.  I don’t remember the packing of the trunk before leaving for or from school, but do remember buying my uniform in the school shop in Bournemouth and I remember the tedium and excitement of sewing in the red cloth name labels into every. Single. Item. I remember the white shirts, blue kilt, Sunday suit and felt hat, the fawn socks, the 6 pairs of regulation white pants and 3 pairs of navy blue ‘bullet proofs’- I did not understand that phrase until I was an adult.

I remember, a recent, possibly a composite memory, standing in the entrance hall with girls all around me, coming and going, the sound of feet walking, thundering, on the wooden floors.  The sound of crockery in the kitchen and dining hall, tea for the parents perhaps? I don’t remember my, or any, parents coming in to say goodbye.  I remember feeling lost, my pulse thumping in my ears, muffled sounds.

I remember that first night- I think a Sunday-and the senior common room girls, fifth formers, giving us a ‘welcome party’.  I can hear the laughter, directed at me I supposed, the games that led to me feeling both terrified and humiliated in equal measure.  Pushing a marble along the floor with my nose, bottom in the air, coming last. Fussing and crying when expected to eat and feed to another new girl, purple angel delight, watered down, sloppy, revolting, the nausea threatening to overwhelm me (I really hated angel delight as a child, and even to this day. Being watered down and purple did not serve to endear it to me).

I remember the common room with a long wooden table in the middle, endless hours of prep, writing letters home on a Sunday afternoon. A record player in the corner and the first time I heard “ground control to major Tom…” coming from it. 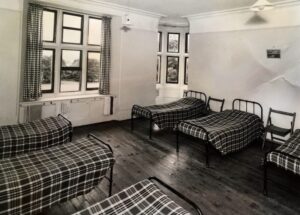 I remember the sense of security that came from the bells, knowing what was about to happen, predictable, comforting. I remember being surprised by my, up to that point, undiscovered athletic ability- or at least my talent for playing hockey. I was good, with an unbeaten reputation as goalie and defence, it gave me some small sense of belonging generally lacking in my life. Sadly it didn’t extend to other sports, but I was good at something.

I remember crocodiles of girls walking across the heath to the sweet shop on a Saturday, dressed in mufti, pennies in hand having stood in line earlier to collect our pocket money, marked down in a notebook by the house mother, date, amount, total left. I remember being door monitor, girls standing up for teachers, black board rubbers flying past (usually) my head, knuckles rapped with a ruler for sucking my thumbing, or for daydreaming, maybe both.

I remember nine beds and 9 girls, nylon nighties and static storms under sheets.

I remember the iron bedsteads and horsehair mattresses, misshapen, shaped by a dozen or more girls before, making turning or lying on my stomach almost impossible.

I also remember ‘empty bed’, being the empty bed, the complete absence of being, belonging, or existing in the eyes of others. The alienation from my peers complete. The terror of being found with an unmade bed because someone had stripped it- an empty bed doesn’t require making after all- and of having to remake it and risk being late for school, or breakfast, or both, second guessing when it would inevitably get stripped. I remember being found by the housemother, crying on the stairs, tipped off by a friend I didn’t know I had- taking me back to her rooms for tea and cake until I confessed the horror and isolation of ‘empty bed’, and the fear of the consequences for being a ‘tittle tattle’ for snitching on my peers. But it stopped, never to start again, never mentioned again, never spoken of again, modelling a way of relating to others that challenges me to this day, started at home (what happens at home stays at home), honed by further modelling at boarding school.

I remember being ambushed on my bed, to be taken for a cold bath, an initiation ritual, and having a wire coat hanger in my hand.  That stopped too after I instinctively lashed out and caught the lower fourth girl standing in the firing line.  I remember numerous small, and large, humiliations, both individual and shared with peers, at the hands of adults employed to look after us, not care for us, there was no obvious care involved, encouraged as we were to be self-sufficient and independent.

To End This Part…

There are so many more little snippets of memory, some of it good, some of it not, but not one of the coming or going to and from school for holidays or exeat days, though I do remember one visit to an ice cream parlour with the friend I didn’t know I had, and I assume my mother though she’s not in the memory, and eating giant knicker-bocker-glories.

I know we moved house twice while I was away at school, but wasn’t there for the moves, leaving one house and returning to another. I returned home that first Christmas, to a new house and was given a teddy, but not the teddy I wanted so much but hadn’t dared to asked for. I took it back to school after the holidays, picked up a dorm mates riding crop and beat the hell out of it. I remember being asked, but don’t recall the conversation, if I was enjoying school. I hated it and said so, begged not to go back. But back I went, the bear getting the brunt of that I suppose.

It would take an entire book, and a good editor, to record everything about my boarding school experience. It wasn’t all bad or good (despite the promises of Malory Towers), fun was had, as well as misery, but there are gaps in my memory and problems with the chronology of it all, which in the greater scheme of things doesn’t matter that much as my purpose in writing this is not to write a book, but to put my thoughts into words to make sense of them and to evidence some of the experiences I had that led to the adaptive behaviour that I, along with countless other ex boarders, developed as a result of being sent away to school.

If you have any questions relating to this post or would like to book an appointment, you can contact me via the contact form, or by leaving a message on my phone: 07598 237236. I aim to respond to messages within 24 hours.